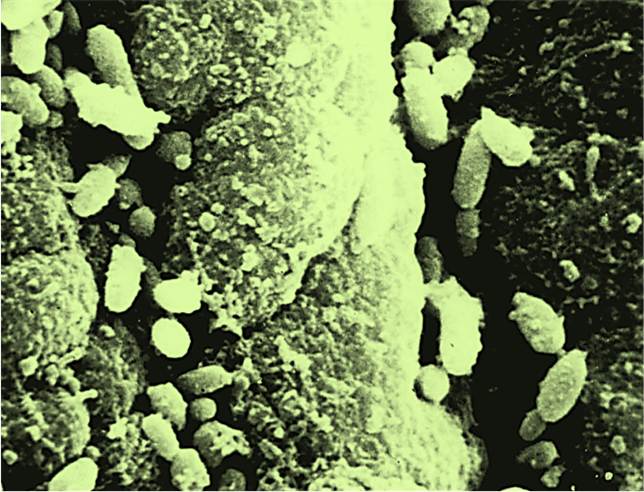 Some Morphometric and Microbiological Aspects of Erosive-Ulcerous Lesions in Upper Part of Digestive Tract in Patients with Hepatocirrhosis and Portal Hypertension.

Abstract
The present study is directed to the most principal and debatable questions of combined affection of the upper part of digestive tract and liver. Mucosa state of upper part of digestive tract was evaluated on morphometric and microbiological study of digestive tract and liver. Pathogenesis features of the development of erosive-ulcerous process against the background of hepatocyrrhosis (HC) progression were characterized. Autopsy with stomach examination was held in 52 patients, which died from HC. Microbiological study was conducted in 40 patients with HC and portal hypertension in admitting to the hospital and after their treatment. As a material for microbiological study we used gastric juice, biopsy materials from mucosa of the esophagus and cardia. Serological study included detection of antibodies (IgG) to Helicobacter pylori (Hp). So-called “hepatogenous ulcers” are characterized by specific morphology of atrophic and disseminated with Hp gastric mucosa. HC considerably exacerbates the course of combined erosive-ulcerous affection of esophagus and stomach, which in turn accelerates development of hepatocellular insufficiency. Study shows that so-called “hepatogenous ulcers” have not only specific localization and quantitative evaluation but specific morphologic features that differ them from classic “peptic ulcers”.
Keywords: Hepatocyrrhosis, Hepatogenous Ulcers, Helicobacter Pylori

Determining the Reference Intervals of Long-Chain Fatty Acids, Phytanic Acid and Pristanic Acid for Diagnostics of Peroxisome Disorders in Children.

Abstract
In this paper we are given the following information about the biochemical properties of long-chain fatty acids (LCFA), phytanic acid and pristanic acids and their biological role. This article describes procedure of the analysis of these compounds by gas chromatography-mass spectrometry (GC-MS) from the sample preparation step to obtain a specific result. Presented reference values of long chain fatty acids and main biochemical markers of peroxisome disorders (phytanic acid and pristanic acid) in plasma and examples described of changes of these values in various pathologies, such as hereditary diseases in peroxisomes in children and adult. The complex GC-MS analysis of LCFA, pristanic acid and phytanic acid is an effective method to identify patients with peroxisome impairment, especially for diagnostics Zellweger syndrome spectrum, rhizomelic chondrodisplasia punctata type 1 and Refsume’s disease. This article is intended for doctors clinical and laboratory diagnosis, specialists in the field of clinical genetics, pediatric neurologists, and scientists and audiences.
Keywords: Long-Chain Fatty Acids (LCFA), Pristanic Acid, Phytanic Acid, Gas Chromatography-Mass-Spectrometry, Peroxisome Disorders

Characteristic of Shredded Made from Boiled Fish (Euthynnus Affinis) with Substitution of Okara.

AbstractBoiled fish is one of traditional fish process that people like due to the low price and high nutrient content. However, it has short shelf-life, salty taste and less appearance. Diversification product such as shredded is required to improve the quality of boiled fish. The purpose of this study was to improve the characteristics of shredded made from boiled fish with substitution of okara. Boiled fish was soaked at different water condition (cold and hot) and soaking time (10, 20, 30 and 40 minutes). The data indicated that hot water with soaking time 30 minutes showed higher decreasing salt contents compared with others. The resulting boiled fish was made with substitution of okara (0, 10, 20, 30, 40 and 50%). The results indicated that substitution 20% (w/w) okara showed better characteristic that others with water, protein, fat, ash content, TBA, soluble dietary fiber, insoluble dietary fiber values was 7.60%, 32.08%, 28.72%, 3.23%, 0.27 mg/kg, 1.39% and 7.67%, respectively. Moreover, sensory evaluation was proposed to measure the product’s response by panelist and showed significant different in odor and texture characteristic.
Keywords: Boiled fish, Dietary fiber, Okara, Shredded

Efficacy of Endoscopic Interventions in Prevention of Gastroeshophageal Bleeding in Patients with Liver Cirrhosis.

Abstract
To analyze the survival of patients with liver cirrhosis, and to assess the effectiveness of endoscopic interventions in the prevention of portal genesis bleedings. To evaluate the efficacy of endoscopic interventions, our study included 449 liver cirrhotic patients with portal hypertension in the period from 1996 to 2015, admitted with bleeding from variceal bleedings or the threat of its recurrence. All patients were divided into 2 groups of the study. The main group included 239 patients treated between 2008 and 2015 in the control group - 210 patients in the period from 1996 to 2007. The analysis showed that the percentage of patients without recurrence of variceal bleeding when performing only endoscopic interventions was 27% (33 patients) in the control group and 54.2% (64) in the main group. With the phased tactics of portosystemic shunt performance after endoscopic interventions this figure amounted to 32.4% (45) and 109 (61.6%). In the structure of mortality of patients without cirrhosis in the long-term period (81 patients) with endoscopic interventions recurrence of bleeding were observed in 40.7% (33) cases in the control group and 68.1% (64 of 94) in the main group. In turn, when combined endoscopy and portosystemic shunting in the structure of the patients, without counting deaths from progressive liver cirrhosis, the proportion of absence of recurrence was 45.9% (in 45 of 98 patients) and 71.2% (in 102 out of 153 tracked in the remote period excluding deaths from cirrhosis). In the group of patients that do not carry out any endoscopic intervention and the patients received only conservative therapy only in 3 (10.7%) cases it was possible to avoid recurrence of bleeding, which determines the therapeutic ineffectiveness isolated attempts to reduce the risk of recurrence of hemorrhagic syndrome. Modern possibilities of endoscopic technologies have significantly improved the results of treatment and prevention of varicose bleeding or the threat of its recurrence, and the commitment to the phased tactics, with a combination of minimally invasive and traditional decompressive surgery, allowed to increase the survival rates of patients with 80% to 88% - up to 1 year and from 42% to 64% - to 3 years of follow-up.
Keywords: Liver Cirrhosis, Portal Hypertension Syndrome, Bleeding From Esophageal And Gastric Varices, Portosystemic Shunting, Endoscopic Ligation, Endoscopic Sclerotherapy.